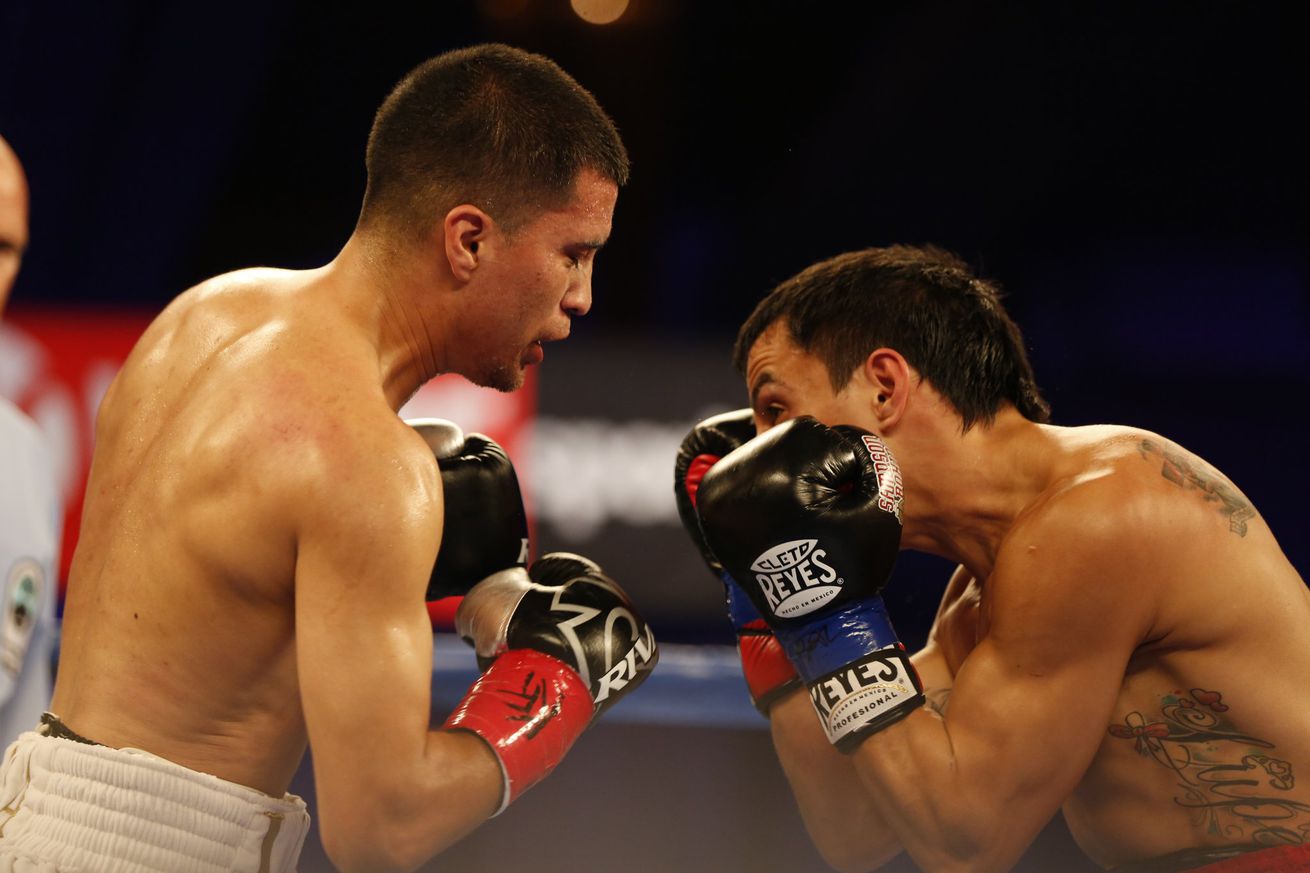 Adam Lopez left the ring without a win for the first time as a pro tonight, and two big comeback knockouts highlighted tonight’s ShoBox.

That said, Lopez was definitely not at his best in this fight, and Reynoso (18-1-2, 7 KO) gave him far more trouble than I think most anticipated. Lopez was being talked about as a possible challenger for the IBF super bantamweight title if he won here — that belt recently taken by Jonathan Guzman in Japan — but that didn’t look like a great idea even if he had gotten by with the win tonight. He had too much trouble with a wild, 5’3″ opponent, whatever the reason.

But he did dig deep late, and he closed strong. I thought that was enough to get him the win, but it didn’t turn out that way. I don’t personally have a big issue with the result, but I do think 7-3 for Reynoso is reaching.

One of the two fighting sons of Julian Jackson, Julius was coming off of a TKO-2 loss to Jose Uzcategui last October on FS1. Here, Jackson (19-2, 15 KO) boxed pretty well for two rounds, but Odom (14-2-1, 13 KO) told his corner after the second round that he was trying to sucker Jackson into making a mistake and gain too much confidence.

That turned out to be an effective strategy, as Jackson dipped into a monster right hand about two minutes into the third round, and the fight was over there. Jackson has talent, but just does not have the chin. Odom can bang, and so can Uzcategui, but we’ve seen fighters go rounds with those guys, too.

Foster debuted on ShoBox last November with a loss. He returned in February with a win. And here, he was outworked by Chinea (13-1-1, 6 KO), whose dogged determination made the difference on two scorecards, with judges giving him careds of 78-74 and 79-73, and the third scoring it 77-75 for Foster. BLH had a draw, 76-76, but I felt if anyone earnedthe win, it was Chinea, who dug deep in the final three rounds especially.

Foster (10-2, 7 KO) is a skilled boxer, but not quite as slick as he needs to be against a guy like Chinea, who just crowded him and put him on the ropes all night long. To Foster’s credit, he fought back, landed a lot of shots, too, and didn’t do badly, but it wasn’t the situation he wanted, and it hurt him on the cards. It just doesn’t look good to be pinned against the ropes for so much of the fight, and in otherwise competitive rounds, that can be a difference maker for a judge.

In an explosive opener, junior middleweight Khiary Gray suffered the first loss of his pro career via second round TKO to Ian Green. Green (10-1, 8 KO) was hurt in the first round, and hurt pretty badly in the second, but he was able to buy himself some time and space by getting on his bike. That led to an aggressive Gray (13-1, 10 KO) making some tactical mistakes, one of which led to his getting crushed with a right hand bomb, putting him on the canvas.

Gray getting back up was pretty remarkable, as it was a clean shot that shook him completely to his core, but he did make it up at a count of nine, and tried to hang on for the final 30 seconds of the round. He couldn’t quite do it, though, as Gray dropped him again with 10 seconds left, and referee Arthur Mercante Jr stopped the fight.

It’s a big win for Green, a 22-year-old from Paterson, N.J., who was making his national television debut and took this fight on five days’ notice. And it’s a heartbreaker for Gray, who brought along a lot of fans from Worcester, Mass., who were firmly in the 23-year-old’s corner. After the fight ended, Gray was in tears in his corner, but also walked across the ring to hug and congratulate Ian Green. I think we’ll see both of these guys again.